As a matter of fact, converting videos is nowhere an easy task especially when you are doing it on your PC. There are many video converting software available in the market that helps you to edit the videos but converting it from one format to other is quite a hell of a task. Fortunately, the Allok Video to MP4 Converter for Windows has got you covered with everything you want.

Whether you want to convert a WMV video to MP4 format or simply an FLV video to an AVI file, Allok Video to MP4 converter is all you need. The best part of this software is that it supports tons of video formats that no other converter on earth can support. In addition to the typical formats supported by the software, some unique formats range from Apple iPod to Apple TV, from Sony PSP to Creative Zen Vision, from PS3 to Archos AV300 and many more. 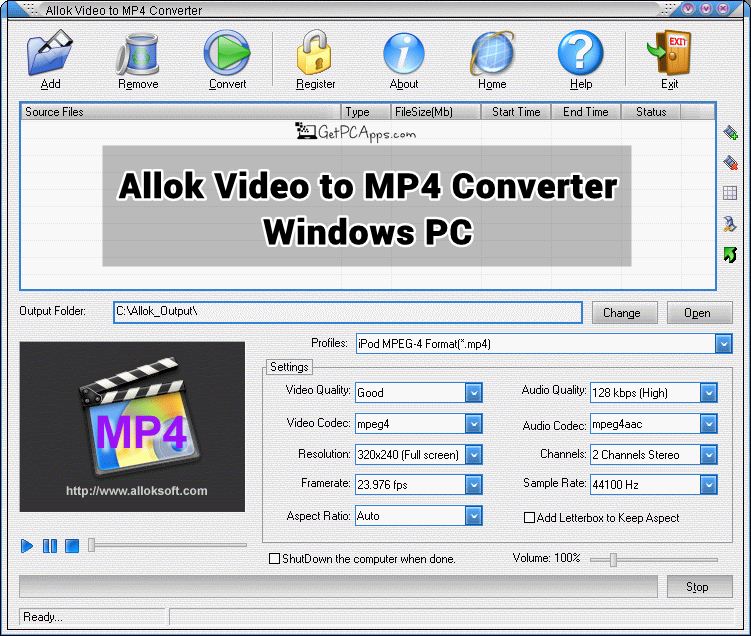 In addition to tons of formats support, The Allok Video to Mp4 Converter for Windows offers tons of amazing features that are worth mentioning here. One of these key features is that it works completely offline so that you can use it anywhere you want where a converted video is needed. Moreover, this software is an extremely powerful MP4 converter that comes with fast conversion speed and converts the format by keeping the quality in consideration.

Allok Video to MP4 Converter for Windows also keeps the original aspect ratio of the video so that you don’t have to compromise on the quality of the video anymore while using a conversion software. Not only this, but the software also comes with the feature to resize the movie to fit resolution resulting in the quality and size at hand.

Allok Video to MP4 Converter is an easiest-to-use video converter software that lets you convert your favorite clips into the MP4 format to be later played on a portable device. In addition to that, the key features of the software include:

System Requirements for Allok Video to MP4 Converter for Windows 7, 8, 10, 11

You might be required to purchase the software license from their respective developer, in case of trial windows software versions.